Magnetic Resonance Spectroscopy (MRS), also known as nuclear magnetic resonance (NMR) spectroscopy, is a non-invasive, ionizing-radiation-free analytical technique that has been used to study metabolic changes in brain tumors, strokes, seizure disorders, Alzheimer’s disease, depression and other diseases affecting the brain. It has also been used to study the metabolism of other organs such as muscles.

Magnetic Resonance Spectroscopy is an analytical technique that can be used to complement the more common magnetic resonance imaging (MRI) in the characterization of tissue. Both techniques typically acquire signal from hydrogen protons (other endogenous nuclei such as those of Carbon, Nitrogen, and Phosphorus are also used), but MRI acquires signal from primarily from protons which reside within water and fat, which are approximately a thousand times more abundant than the molecules detected with MRS. As a result MRI often uses the larger available signal to produce very clean 2D images, whereas MRS very frequently only acquires signal from a single localized region, referred to as a “voxel”. MRS can be used to determine the relative concentrations and physical properties of a variety of biochemicals frequently referred to as “metabolites” due to their role in metabolism. 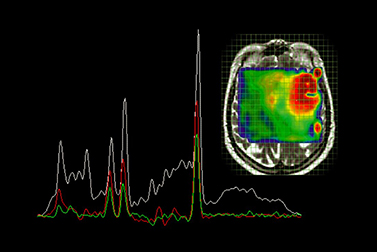