Diffusion-Weighted Magnetic Resonance Imaging (DWI or DW-MRI) is the use of specific MRI sequences as well as software that generates images from the resulting data, that uses the diffusion of water molecules to generate contrast in MR images.

Conventional DWI (without DTI) directly visualizes the ischemic necrosis in cerebral infarction in the form of a cytotoxic edema appearing as a high DWI signal within minutes of arterial occlusion. With perfusion MRI detecting both the infarcted core and the salvageable penumbra, the latter can be quantified by DWI + perfusion MRI. 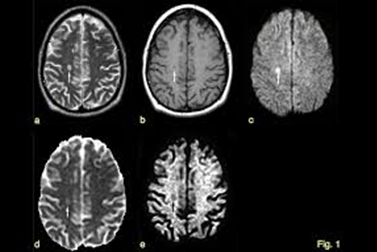